Dog Sees God: Confessions of a Teenage Blockhead by Bert V. Royal, is getting marvelous reviews, with Colleen’s Peppermint Patty as a favorite. Here’s what reviewers had to say… 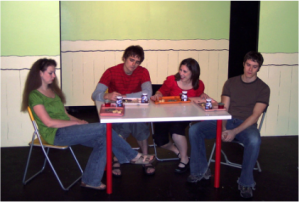 “Colleen E. Miller (Tricia) and Anna Schutz (Marcy) turns in remarkable performances by playing homage to the characters they inhabit, but giving them such a human quality that you never once doubt they are the animated character the world has grown up with.” – Michael Roberts (Stage Door Chicago)

“There are exactly two funny moments in the show. “She was all, ‘Whah whah whah, whah whah whah,'” says Patty in her snotty teen-speak.” – Nina Metz (Chicago Tribune)